Today was mail day it seems. Which I love when there's no official mail but only the fun kind. I was excited to get my new Born Pretty plates. They launched their second line of stamping plates, divided into two sets (of 5 and 10 plates, both of which I bought) and today I'll show you the first set, which are the plates BP11 to BP15.

I won't be posting photos of the plates themselves, but I stamped the images on a piece of paper, which gives a better idea about the images.

And speaking of the images. The designs transfer nicely, are clear, and depending on your stamping polish, stamper, and the method you use the results might vary. So here's my results, using the XL stamper (the big black one from ebay which some companies get and sell under their names), and 05 Inkheart from the Love Letters special edition from Essence. 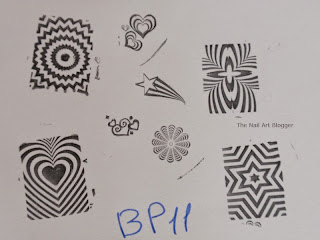 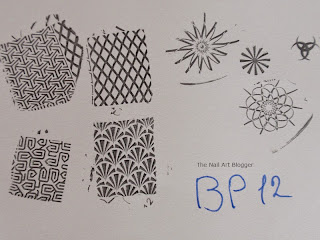 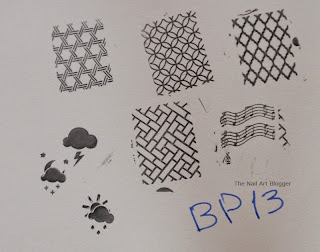 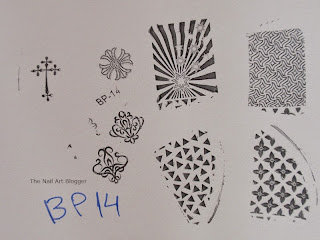 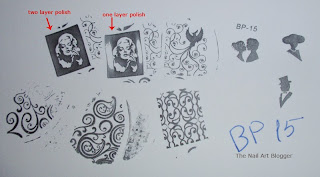 A note about BP15. See the Marilyn image there? First I stamped the regular way. Which didn't pick the polish from both her sides. Tried it again, same result (that one went onto the lint roller hihi). And then I decided to try another method (the two layer I'm pointing at in the photo). I applied the stamping polish, scraped it off, then applied it again and scraped it off again. And you see the result of it on the photo up there. Not sure how it would look on my nails, but once I use it in nail art, we all get to know.

All-in-all I like the designs in this set. I already see myself making colorful decals out of most of them, and also using them directly as stamping nail art. I'm glad Born Pretty came up with the idea of making their own stamping plates, even though the designs on their first set were tiny, I still like them. With a bit of creative thinking, you can definitely work around a design, no matter big or small.

By the way, I bought those sets myself. And for some lucky reason, I got them way sooner than expected! (not complaining here, just happily surprised) If you want to get the set, you can check on Born Pretty Store's website. The item number is #17309. It's on sale at the moment (just an FYI).

Well, that's it for now. I'll be making another post with the other set soon. I'll hopefully have a better daylight for the photos.

Thanks for looking, feel free to leave a comment. And until next time!
Posted by Unknown at 4:56 AM

A glimpse of the past